The pastor of Villeray’s Holy Family parish received the 2016 Bishop Crowley Memorial Award for his outstanding commitment to youth ministry for more than half a century.

Awarded Nov. 11 at the 18th Catholic Community Rally, Fr. Baxter was recognized for his 51-year ministry to youth through a parish- and camp-based leadership program. He is the 32nd recipient of the award since its first bestowal in 1983.

In conferring the award, ESCC president Diane Lemay said: “Fr. Baxter has devoted a lifetime to developing, encouraging and inspiring Christian youth leadership. He has been instrumental in providing not only the English-speaking Catholic community but also the wider community with generations of young leaders committed to serving others, inspired by Gospel values.”

The success of his ministry revolved around a weekly sports-leadership program, which has operated on Friday evenings since the mid-60s. The parish venue provided a natural place for youth to gather on a regular basis to play sports (primarily floor hockey) and to build fellowship. In the process, the youth were given the opportunity to develop leadership skills, “were taught the value of teamwork,” and were encouraged to grow in their spirituality and “discover new things about God and themselves,” the ESCC citation noted.

In conjunction with the parish-based program, Fr. Baxter also spearheaded the establishment of a summer boys camp and has been at the forefront of its operations since 1965. Its inaugural site opened in Sherbrooke, followed by a move to Camp Kinkora in 1966. By 1972, Fr. Baxter had purchased a permanent site located near Mont Tremblant, known as Camp Caritas. The camping experience complements the Friday evening program and is still offered each summer. 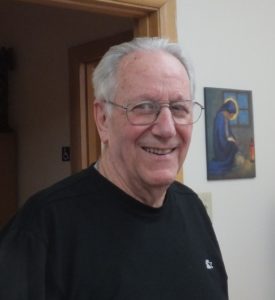 Now 83, Fr. Baxter continues both to maintain the camp through considerable fundraising as well as to carry out his mission to youth, while serving full time in parish ministry.

“I just always tried to remain relevant,” Fr. John Baxter explained upon receiving the award, an approach he found was key in both outreach to upcoming generations and parish ministry.

More than 3,000 youths from the Greater Montreal area and beyond have received Christian leadership development and training under the direction and mentorship provided by Fr. Baxter and his team of Friday-evening leaders and camp staff.

The rally was held at La Plaza Hotel in downtown Montreal on the second evening of the three-day Parish Vitality Conference, organized by the Office for English Pastoral Services of the Archdiocese of Montreal. Up to 51 Catholic-affiliated groups participated in the rally.

Ordained a deacon on October 29, 1991, at St. Raphael’s Parish by Bishop Leonard Crowley, Richard has ministered with a number of parish priests over the years and continues to do so. Even in his years before becoming a deacon, Richard, along with his wife Brenda Cooney, were involved in many aspects of parish life at St. Brendan’s Parish beginning in 1973, with Father Gerald (Jerry) Sinel, Father Brian Moon and later with Father Paul Pomkoski. Richard’s original mandate as a deacon was to work with the youth at Holy Family Parish with Father John Baxter. Richard continues this mandate to this day.

Starting in December 1990, he served at St. Raphael’s Parish with Father Gerald Sinel until Father Sinel died in 2007 and the ensuing closing of the parish and church. He and his wife Brenda were later mandated by the Archdiocese of Montreal as a Diaconal Couple to Our Lady of Fatima Parish in St. Laurent to assist Father Brian Moon. They were actively involved as leaders in the parish, including involvement in the Sacramental Initiation of school-aged children, RCIA, training of Eucharistic Ministers, Lectors and Altar Servers, and preparing couples for marriage. Richard baptized children and preached on a monthly basis, a ministry of the diaconate that he truly loves. Brenda and Richard led the community in song at mass on Saturdays. Richard served there for two years until Father Moon’s sudden passing in 2011. Since then, he has been solely involved at Holy Family Parish where he assists Father John Baxter at masses, weddings, funerals, and baptisms. He also assists Father Baxter with the Floor Hockey League every Friday evening. Collaborating with Father Baxter beyond parish life, Richard has been a director of Camp Caritas in Lac Labelle in the Laurentians for the past 20 years, spending two weeks every summer in ministry to approximately 100 teenaged boys.

Richard’s service led him beyond parish life to the field of education where he assisted in the animation of a Youth Retreat Program for high school students of the English-speaking Catholic Schools across the Island of Montreal. He also served as Pastoral Animator in two elementary schools of the former CECM as well as a secondary school within the Sir Wilfrid Laurier School Board.

Another domain of involvement and service in Richard’s life is his becoming an associate of the Congregation of the Sisters of the Holy Names of Jesus and Mary in 2003, along with Brenda, his wife. At present, they are both on the Leadership Team for the English-Speaking Associates of Quebec and continue to live, work, and share in the charism of the SNJM Congregation. Once again, Richard uses his creative skills in technology and music in the service of others.

On a personal note, 2020 was a special year for Richard. Besides retiring as Executive Director from the Pillars Trust Fund (Montreal’s Catholic fund-raising organization), he and his wife Brenda celebrated their 50th wedding anniversary in May 2020, enjoying life with their two children and a grandson.